A Taste of the Past: History, Menus and Recipes from The White House Through the Years 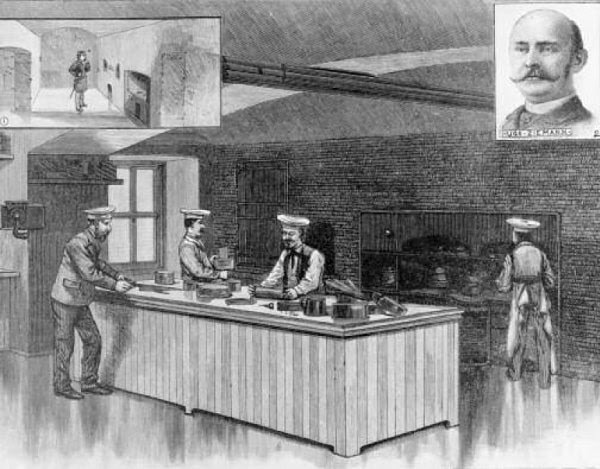 Open hearth cooking—cooking in a fireplace—was the only way to cook in the White House up until Millard Fillmore’s administration (1850-1853). Meats sizzled on spits over cracking flames or roasted within tin reflecting ovens in front of the hot fire. Iron and bronze pots suspended from a swinging crane held stews, soups, and vegetables. Bread was baked first in the bake ovens built into the back of the hearth wall, and as the temperature dropped inside the oven, in went the pies, and later the cookies and custards. Knowing how to control the cooking temperatures was an art. A cook had to have an understanding of coal and woods and their burn properties. Coal was the hottest and burned the longest. Hard woods—ash, oak, hickory, maple, and dogwood gave good heat, burned evenly, and lasted a long time. Pots and pans were moved in and out of the heat, moved close to the fire or away to control cooking time. A kitchen inventory during James Monroe’s administration included, “1 large copper soup kettle, 1 Large ham boiler, 1 large preserving kettle, 1 ditto fish kettle, with drainers, 1 Large coffee boiler, 1 Brass stew pan, 3 Large sauce pans, 19 Of different sizes . . . 2 Griddles, 1 Toasting iron, 1 Frying pan, 5 Jack spits, 3 coffee mills, 1 Old dripping pan, 2 Spit stands, 4 Trivets, 1 Marble pestle and mortar, 4 Sheet iron cake bakers.”

Today the chefs, cooks, dishwashers, and waiters in the White House kitchens must prepare and serve meals for the President and his family, as well as guests from many countries around the world. Sometimes they create meals and refreshments for five or more social events a day, ranging from family meals, to teas, to private parties, to formal state dinners, to larger receptions for hundreds of people. Many of those who have served our nation cooking for “America’s First Dining Table” feel the same about their experience as did Henry Haller, the Executive Chef for five presidential families from the Johnsons to the Reagans: “My own role as the Executive Chef of the White House has certainly been the most rewarding position I have ever held.”

James Buchanan, the only bachelor president, thought that multiple inaugural balls were outrageous wastes of time and energy. He reinstated the single inaugural ball concept, but had to construct a new $15,000 building on Judiciary Square in Washington to accommodate his 6,000 guests. Guests were served on long tables set against red, white, and blue walls, and when their appetites were satiated they danced beneath a white ceiling glittering with hundreds of gold stars.


For information concerning open hearth cooking, check out “Cooking – Open Hearth” on nps.gov and The New York Times article “Open-Hearth Cooking: Why All the Fuss Over Hot Ashes?" For videos demonstrating open hearth cooking, go to: “Hearth Cooking” by the Carroll County Times and “Open Hearth Cooking in Camden, New Jersey." You can see pictures of Buchanan’s Inaugural Ball on the Library of Congress website loc.gov. The above series is taken from Our White House: Looking In, Looking Out by Mary Brigid Barrett.